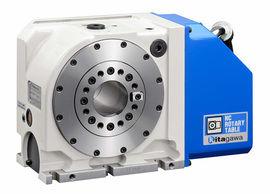 The Japanese manufacturer Kitagawa, represented in Britain and Ireland by sole sales agent 1st Machine Tool Accessories, has introduced the first in a new MK-series of general purpose rotary tables.

The MK200, which has a 200 mm diameter faceplate, features increased holding torque compared with the MR-series table that has been superseded. The result is faster, heavier duty, more productive machining of a clamped workpiece. As the unit is also more compact, loss of table area and working volume in a machining centre is minimised.

The manufacturer has stronger and more compact rotary tables of similar capacity in its product range, for example the GT200 and CK200 respectively, but the MK200 is designed to meet 90 per cent of all customer requirements.

It provides a rigid 4th CNC axis and reflects Kitagawa’s focus on constantly improving the standard of its tables in three main areas: enhanced performance, improved mounting, and breadth of rotary joint availability.

Clamping torque of the MK200 is 40 per cent higher at 570 Nm than that of the MR200. As with all Kitagawa tables, this maximum holding torque is determined by the point at which the force on the worm wheel causes it to displace by 30 microns. In contrast, other manufacturers use the slipping torque figure as a maximum, which Kitagawa regards as likely to cause inaccuracy at best and catastrophic failure at worst.

Additionally, drive torque is highest in class at 270 Nm and the spindle through-hole diameter has gone up from 45 to 70 mm. The type of the faceplate is specified by the customer, either with T-slots or pre-drilled holes.

The advantage is that a chuck, trunnion or other workholding device can be mounted directly onto the rotary table’s spindle, reducing the distance from the spindle bearing. Such compact assembly lessens the load on the bearing, increasing rigidity and longevity.

At only 155 mm from front to back, the depth of the new table is 10 per cent less than that of the former MR version. Together with recessed bolt mounting, it has allowed the footprint of the MK200 to be reduced by 40 per cent. Moreover, if a riser block is needed to raise the table’s centreline, the same small footprint of 407 cm2 is preserved.

The design also reduces accumulation of chips around the base of the rotary table, reducing cleaning time and ensuring the absence of interference to the workholding system – an important consideration in automated production cells.

The MK200 accommodates built-in 6 +1 port rotary joints, compared to only 4 +1 for its predecessor. If, for example, a trunnion arrangement is in use with one end powered by the rotary table, greater flexibility of hydraulic or pneumatic workholding actuation is provided via the rotary joint housed within the large spindle bore. This avoids wear and interference due to the presence of tubing if workholding actuation is brought forward of the faceplate.

The 6+1 rotary joint includes a 12.5 mm diameter, multi-purpose hole through the centre for additional air or hydraulic services. The hole can also be used as a duct for cables feeding signals back from fixture sensors confirming correct workpiece seating. The design of the workholding configuration can thus be improved and its capabilities enhanced.

1st MTA is able to provide a high pressure 25 MPa, 4-port or 6-port rotary joint instead of the standard 7 MPa variety, enabling a further reduction in fixtures sizes as well as improved clamping speeds.

A video summarising the benefits of the MK200 may be viewed at: 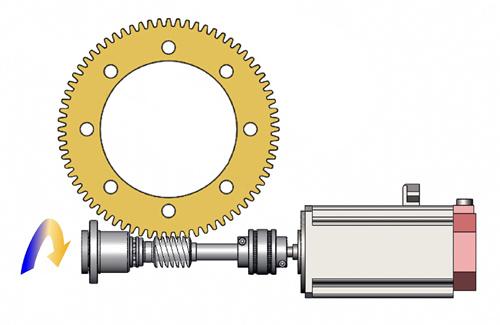 Caption: As the worm screw on the MK200 drives a worm wheel of large diameter, greater torque is generated.