Quick-change chucks save time and money

Reducing job set-up times is key to saving money when machining, particularly if the work repeats regularly. Switching from hard jaws needed for a first operation (op 1) to soft jaws for a second (op 2) requires removing them, cleaning the serrated interface, bolting on the soft jaws, inserting the boring ring and skimming the jaws. It all takes time, during which the spindle is not turning and production stops.

Workholding equipment supplier 1st Machine Tool Accessories, Salisbury, advises that a quick-change chuck has the ability to eliminate a majority of this wasted time, decreasing the delay between the end of op 1 and the beginning of op 2 by as much as 90 percent. Instead of wasting 20 minutes, changeover typically takes just two minutes.

The process relies on three soft jaws, machined for securing a specific component, remaining attached to their respective base jaw counterparts. Sets of these assemblies can be tightened and released quickly using a manual key, allowing them to slide in and out of a chuck with minimal delay. The solution also ensures that runout is kept within 10 µm of the original TIR (total indicator reading).

As an illustration of the possible monetary savings, 1st MTA has prepared a cost comparison that shows return on investment in a very short time. It is based on the use of a QJR (Quick Jaw Release) chuck from one of its principals, the Japanese manufacturer Kitagawa. The chuck is available in four sizes (7, 8, 10 and 12 inch) and uses the same jaws as standard chucks in the range. Moreover, the interface matches those of other manufacturers. In addition, the bore is identical to that of the large bore chucks in Kitagawa BB range, ensuring that little of the lathe’s capacity is lost when swapping.

The hypothetical illustration is based on the use of a QJR10, a 254 mm quick change, 3- jaw, large-through-hole power chuck with five sets of standard metric quick-change jaws plus soft jaws, which all costs £6,124. The chuck interchanges directly with a Kitagawa BB 210 large bore chuck, priced at £2,177 with five sets of jaws, with which the comparison is made.

Average time saved when exchanging the QJR chuck instead of the BB chuck is 15 minutes. Based on three set-ups per day and an estimated machining cost of £60 per hour, the daily cost saving for the three changeovers is £45. The difference in purchase price between the two chucks is £3,947. At £45 saving per day, the time required to break even is slightly less than 88 days. On this basis, the total saving by the end of the first year is £12,478, after which the annual saving is £16,425.

Apart from the significant financial advantage, 1st MTA points out that secure, high quality workholding is an essential facet of cost-effective turning and can enhance a lathe’s performance, whereas poor retention of a workpiece can reduce output, lower quality and compromise safety.

The company offers a wide variety of jaw, scroll and collet standard chucks, powered or manually operated. Tailored solutions are supplied for holding components for turning and turn-milling, ranging from slight modifications to a standard design in most cases to, for special requirements, highly engineered bespoke items. Although these are often elaborate and require increased initial investment, such solutions can be highly cost-effective, particularly in large volume production applications or when manufacturing awkwardly shaped parts.

Top photograph caption: A jaw being removed from a Kitagawa QJR quick-change chuck. 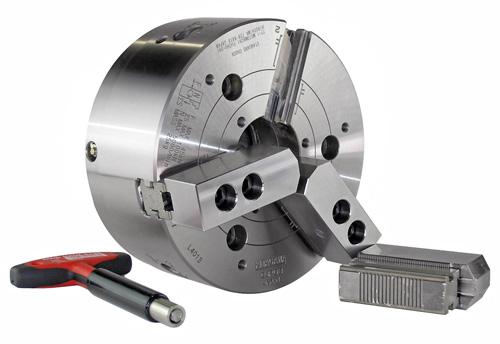 The QJR soft jaw and counterpart base jaw assembly after removal is pictured right.