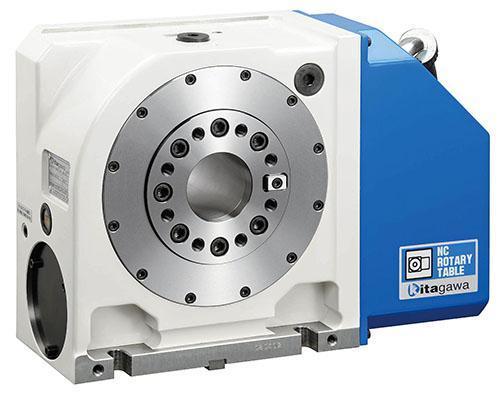 Early last year (2019) the Japanese manufacturer Kitagawa introduced the first in a new range of compact, general purpose rotary tables, the MK-series (www.1mta.com/product/mk-series/), for adding a rigid fourth CNC axis to a 3-axis vertical machining centre. One year later the MK200 has been joined by a second model, the MK250, with significantly uprated performance. Availability in Britain and Ireland is through sole sales agent 1st Machine Tool Accessories, Salisbury.

Most notable improvement on the MK250 is the 1,000 Nm, pneumatically actuated clamping torque, making it more than four-fifths stronger than the first model. As with all Kitagawa tables, this torque is determined by the point at which the force on the worm wheel causes it to displace by 30 microns. In contrast, some manufacturers quote the slipping torque as a maximum, which can cause inaccuracy or even failure.

If a Kitagawa TSR181A tail spindle with integral clamp, also available through 1st MTA, is added for securing a component or tooling column horizontally between centres, clamping torque increases to 1,600 Nm. The result is even faster, heavier duty, more productive machining. As the table has a small footprint, loss of bed area and working volume in a machining centre is minimised.

Kitagawa has both stronger and more compact rotary tables of similar capacity in its product ranges, for example the GT250 and CK250 respectively, but Kitagawa asserts that the MK250 meets 90 per cent of all customer requirements. The unit on its own can support a load of 250 kg horizontally, while it may alternatively be used to hold a component or column weighing up to 125 kg in the vertical orientation. Maximum positioning speed is 33.3 rpm.

The type of the faceplate is specified by the customer, either with T-slots or pre-drilled holes. The advantage is that a chuck, trunnion or other workholding device can be mounted directly onto the rotary table, reducing the distance from the spindle bearing. Such compact assembly lessens the load on the bearing, increasing rigidity and longevity. Cutting torque is 480 Nm and the spindle through-hole diameter is 70 mm.

The table design minimises accumulation of chips around the base, reducing cleaning time and ensuring the absence of interference to the workholding arrangement – an important consideration in automated production cells.

Compact, built-in, 7 MPa rotary joints may be selected from 4-, 5- and (6+1)-port types, the latter having a 12.5 mm diameter, multi-purpose hole through the centre for additional hydraulic or pneumatic services to actuate workholding. The hole can also be used as a duct for cables feeding signals back from fixture sensors confirming correct workpiece seating, enabling the design of the workholding configuration to be improved and its capabilities enhanced.

1st MTA will alternatively provide a high pressure 25 MPa, 4-port or 6-port rotary joint instead of the standard 7 MPa variety, allowing a further reduction in fixtures sizes as well as improved clamping speeds.