Workholding and positioning systems to be launched. Stand: G205 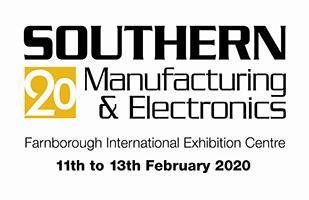 Designed for 5-axis machining applications but equally suited to use on 3- and 4-axis machines, the system consists of three parts – clamping head, work holder and workpiece. The head is supplied either as a manually or automatically operated HSK clamp, while the work holder comprises an HSK interface at the base and multiple options at the top for holding the workpiece, including flange clamps and side clamps.

The most efficient clamping system, however, is the dovetail interface. Its small clamping surface area allows enhanced tool access and its low profile maximises the machine tool’s Z-axis travel. Workpieces up to 200 mm square or diameter can be accommodated.

The final element is the workpiece to be machined, which in the case of the dovetail holder requires a slot to be pre-milled into the raw billet to match the holder profile. A solid carbide cutter is available specifically for this purpose. Additionally, pre-machined dovetailed EN3B (070M20) steel and HE30 (6082) aluminium blanks can be supplied in various sizes for immediate use.

The manual clamping head has a versatile flange that suits multiple mounting options. Available in HSK-A40, HSK-A63 and HSK-A100 sizes, it may be set up off-line and the work holder can be exchanged within 10 seconds, minimising machine downtime.

For automated manufacturing processes, a hydraulically-actuated clamping head is available in the same HSK sizes, with seating detection and air-blow. The work holders have a standard profile to enable them to be handled by any general-purpose robot arm.

An explanatory video showing the range of Swift Klamp products available through 1st MTA and the methods of operation may be viewed at: www.youtube.com/watch?v=D7WwtE4QWn4

Demonstrated also at Southern Manufacturing will be the new RotaVice workpiece positioning system, ideal for production shops where manual mills may still be in operation, but equally well suited to use on a CNC vertical machining centre (VMC). It is a new, manually adjustable indexing head that can be rapidly set to position a component at a multiplicity of rotary angles in the horizontal plane for milling and drilling.

Produced in the UK, the unit is designed to be secured in a One-Lok workholding device manufactured by Chick in the USA, for which 1st MTA is the sole agent in the UK and Ireland. RotaVice can also be exported to manufacturers worldwide that use similar Chick equipment.

Expensive fixtures and the need to change machine set-ups can be avoided, saving money and time. In smaller job shops employing 4-axis VMCs equipped with a full or indexing rotary table, where there may be only one or two people able to program the machine, the load can be lightened by having an operator of a lower skill level set up a component manually for 3-axis machining.

Everything about the RotaVice is fast. First, a One-Lok may be bolted quickly onto a VMC table. Next, positioning the moveable jaw using the built-in, time saving ratchet mechanism leaves only a few turns of the handle to clamp the indexing head in a special RotaVice jaw, also made by 1st MTA, which replaces the standard One-Lok jaw. Lastly, the workpiece is secured in moments in a horizontal orientation using an array of workholding options, which include a 3-jaw chuck.

Adjusting the angle is also rapid and accurate. It is effected by turning a circular locating plate to the required angle and inserting a pin into the relevant hole, an array of which are pre-drilled into the plate at the most common angles. In the standard configuration, 5, 10 and 45 degrees are available. The standard plate can be changed for a specific plate to suit any job that involves the use of non-standard angles.

Another advantage of the RotaVice is that once the angle has been selected, it uses the clamping force of the One-Lok to secure the rotary angle. This force, which is much higher than that offered by standard dividing heads, allows significantly heavier machining cuts to be taken and delivers improved surface finish.

Altering the angle for a subsequent machining operation on the same component is similarly achieved without having to re-clamp the part, thereby avoiding loss of accuracy through tolerance build-up. Intermediate angles can be set using a rotary dial with a one degree increment scale, while very fine adjustments down to ± 0.5 degree can be made using the toggle lever mounted at the top of the unit.

Importantly, RotaVice has a large through bore with a taper and an internal thread, both of which can be configured for use with chucks, mandrels, special fixtures and backstops. These are normally not associated with standard dividing head systems. 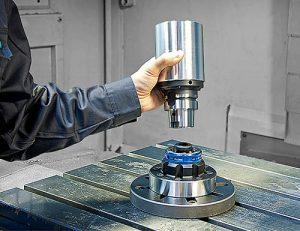 A workpiece in a Swift Klamp holder being inserted into a mating HSK clamping head mounted on the table of a machining centre. 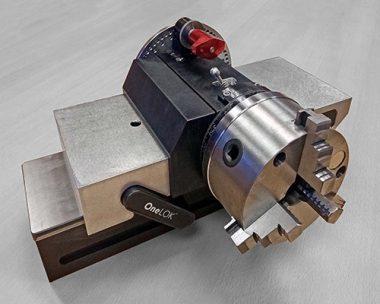 A RotaVice indexing head from 1st MTA secured in a Chick One-Lok using the special jaw.